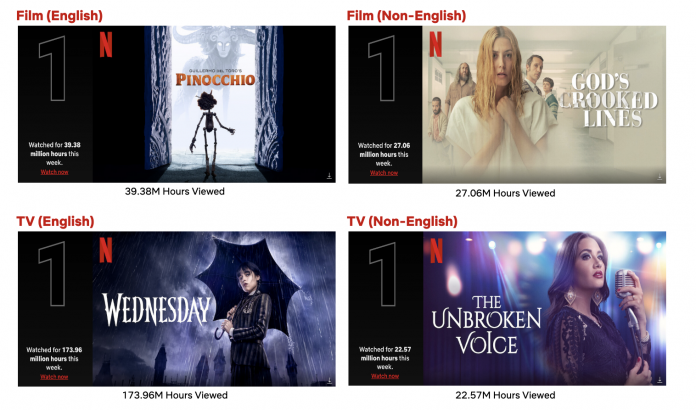 It’s déjà vu as Wednesday slays the English TV List and continues to take the world by storm. The comedy mystery has pulled in an additional 173.96M hours viewed, making it the most viewed title this week. In just four weeks, the series holds the record for the second Most Popular English-language series on Netflix with 1.19 billion total hours viewed. And in four weeks, almost 176M households have seen the series (1.19 billion hours viewed divided by 6.8 hours).

Viewers continued to fall in love with the high-profile love story of the Duke and Duchess of Sussex in Volume II of Harry & Meghan. The in-depth documentary series had 97.71M hours viewed and appeared in the Top 10 in 85 countries, including #1 in the UK. Since its premiere, nearly 33M households have viewed the series (179.26M hours viewed divided by 5.5 hours). The Recruit, starring Noah Centineo, gave viewers a crash course in espionage. The action-thriller debuted at #3 with 52.3M hours viewed. Are they, or aren’t they? Fans tuned in to Season 4 of Too Hot To Handle to find out which couples stood the test of time. The reality dating series had 37.83M hours viewed. Based on the iconic video game, animated series Sonic Prime debuts on the list with 27.72M hours viewed. Season 1 (10.66M hours viewed) and Season 2 (26.57M hours viewed) of Firefly Lane remained on the list for the third week.

With a “Certified Fresh” score of 97% on Rotten Tomatoes, Guillermo del Toro’s Pinocchio topped the English Films List with 39.38M hours viewed. In its second week, critics and fans alike are falling in love with the film, which has received Golden Globe and Critics Choice nominations. Fans are getting into the holiday spirit with I Believe in Santa (19.96M hours viewed), Falling for Christmas (6.4M hours viewed), Scrooge: A Christmas Carol (5.68M hours viewed) and The Noel Diary (5.56M hours viewed). Starring Emma Corrin and Jack O’Connell, Lady Chatterley’s Lover remained on the list with 11.09M hours viewed. New to the list was documentary THE VOLCANO: Rescue From Whakaari, with 8.94M hours viewed.

Colombian dramas were mainstays on the Non-English TV List.The Unbroken Voice sat atop the list with 22.57M hours viewed, while Til Money Do Us Part had 17.12M hours viewed. K-content also returned to the list, including thriller Money Heist: Korea Joint Economic Area, anime Lookism and dramas Under the Queen’s Umbrella and Part 1 (13.5M hours viewed) and Part 2 (13.07M hours viewed) of Alchemy of Souls. Italian rom-com I Hate Christmas had 9.49M hours viewed and Norwegian drama A Storm For Christmas had 12.33M hours viewed.

From July 01, these new rates of domestic LPG cylinders will be released, see the new prices of your city