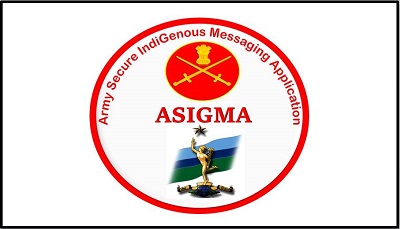 The Indian Army has launched an indigenously developed secure messaging app called ASIGMA (Army Secure IndiGenous Messaging Application) which is a new generation, state of the art, web based application developed entirely in-house by team of officers of the Corps of Signals of the Army, said an official release.

According to Army, the application is deployed on the Army’s internal network as a replacement of  the Army Wide Area Network (AWAN) messaging application, which is being run for the past 15 years.

A PIB (Press Information Bureau) post said, “The application has been fielded on Army owned hardware and lends itself to lifetime support with future upgrades. The bespoke messaging application meets all futuristic user requirements and boasts of an enhanced user experience. It has a variety of contemporary features including multi-level security, message prioritisation and tracking, dynamic global address book and various options to meet the Army’s requirements”, it added.

This future ready messaging application will meet real time data transfer and messaging requirements of the Army, especially in the backdrop of current geo political security environment and is in line with the Government of India’s, Make in India initiative, the statement said.

The Indian Army has braced automation in a major way, especially post COVID-19 outbreak and is taking substantial steps towards paperless functioning. ASIGMA will further boost these efforts and will add to the host of other applications already being employed by the Army over its captive pan Army network”, it said.