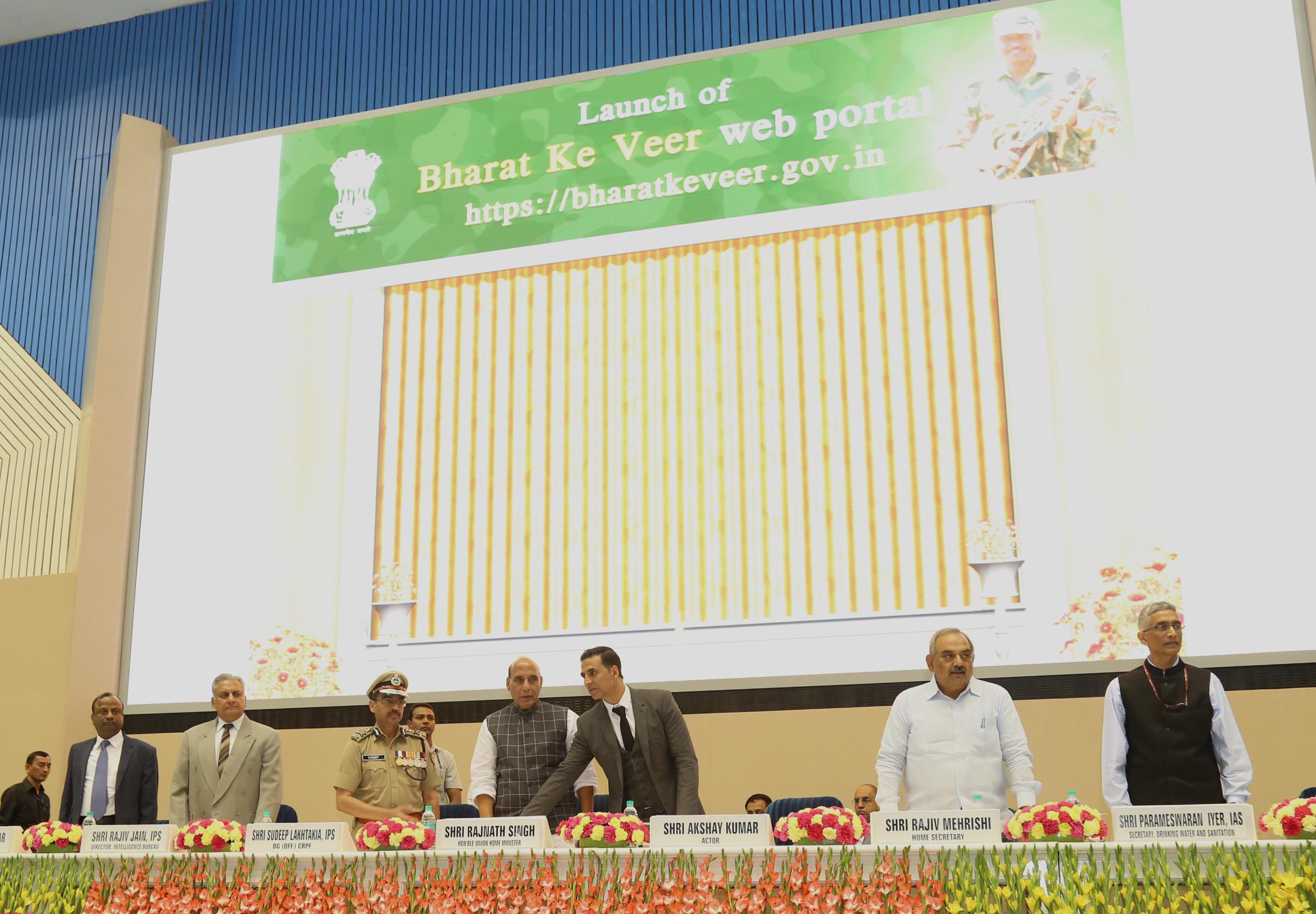 Portal enables people to contribute towards family of martyrs

The Union Home Minister, Shri Rajnath Singh inaugurated the web portal and mobile application named “Bharat ke Veer” on the occasion of Valour Day of Central Reserve Police Force (CRPF) here today. The portal is an IT based platform, with an objective to enable willing donors to contribute towards the family of a braveheart who sacrificed his/her life in line of duty. The amount so donated will be credited to the account of ‘Next of Kin’ of those Central Armed Police Force/Central Para Military Force soldiers. The actor Shri Akshay Kumar was the Guest of Honour during the function.

Speaking on the occasion, Shri Rajnath Singh said that he pays heartfelt tribute to the soldiers who sacrificed their lives for the safety of nation. He said that each moment of lives of CRPF and CAPF personnel is a test of their courage and bravery. He said that a bullet can hit a soldier physically, but no bullet can defeat the courage and motivation of a soldier. The bravery of CRPF commandant, Chetan Cheetah is an example of it who survived 9 bullets, Shri Rajanth Singh added.

The Union Home Minister thanked the actor Shri Akshay Kumar for contributing his ideas to the launch of Web Portal “Bharat ke Veer”. He said that he is satisfied that this portal will be successful and will act as a motivation to the brave soldiers. He said that Shri Akshay Kumar is a hero for people, but Shri Akshay Kumar’s real heros are the soldiers of Paramilitary Forces. Shri Rajnath Singh appealed to the nation to visit the web portal and contribute maximum towards the corpus. The Union Home Minister said that CRPF has a multi-dimensional role to play and he is proud of their bravery and valour. He also said that the martyr’s family should get a support of minimum Rs one crore and the Government would meet the gaps, if any. He said that 45-50% decline in the LWE incidents, 75% decline in incidents in North-East and decline in terror-incidents in Jammu and Kashmir during the last three years is the contribution of the Forces.

The Secretary (Home), Shri Rajiv Mehrishi also thanked actor Shri Akshay Kumar for conceptualizing the idea of this portal and making his contribution to the martyrs’ families.

Speaking on the occasion, actor Shri Akshay Kumar said that this web portal has been designed in a record time of just two and a half months. He said that it will act as a support to the families of the soldiers who sacrificed their lives for the nation. He said that this will act as a platform for those who want to contribute to the families of the bravehearts, but are not aware of the channel. He thanked the Ministry of Home Affairs for working towards launching this portal

The site “Bharat ke Veer” will be available on web portal as well as mobile application. This domain allows anyone to financially support the bravehearts of his choice or towards the “Bharat Ke Veer” corpus. This website is technically supported by National Informatics Centre (NIC) and powered by State Bank of India. To ensure maximum coverage, a cap of 15 lakh rupees is imposed and the donors would be alerted if the amount exceeds, so that they can choose to divert part of the donation to another braveheart account or to the “Bharat Ke Veer” corpus. “Bharat Ke Veer” corpus would be managed by a committee made up of eminent persons of repute and senior Government officials, who would decide to disburse the fund equitably to the braveheart’s family on need basis.

On the occasion, the Home Minister awarded Police Medal for Gallantry to the CRPF personnel (including posthumously) on the occasion of Valour Day today. The Valour Day is celebrated in remembrance of an act of unparalleled bravery displayed by a small contingent of CRPF personnel, pitted against a full-fledged infantry brigade of Pakistani Army, trying to overrun their post, at Sardar Post, Rann of Kutch, Gujarat on April 09, 1965. They not only defeated the Pakistani brigade but also killed 34 Pakistani soldiers and captured 4 of them alive. The CRPF successfully defended the post till the arrival of reinforcements. The saga of valour of Sardar Post is a rich source of inspiration to the officers and men of CRPF and befittingly 9th April is observed as the “Valour Day”.

How Do I Register A Domain Name Properly?

Turning Traffic in to Adsense Traffic