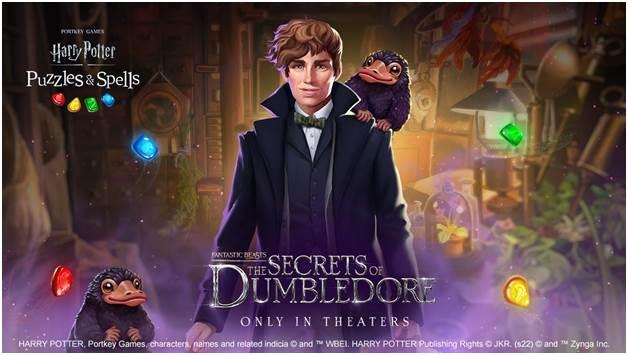 Zynga Inc. (Nasdaq: ZNGA), a global leader in interactive entertainment, announced that its magical Match-3 mobile game, Harry Potter: Puzzles & Spells, is introducing a special in-game series of events in conjunction with the launch of Warner Bros. Pictures’ new film, “Fantastic Beasts: The Secrets of Dumbledore,” now playing in theatres worldwide. The events can be glimpsed in this trailer:

By featuring magical characters and creatures from the film franchise, the limited time Fantastic Beasts Celebration invites players to experience the wizarding world of “Fantastic Beasts: The Secrets of Dumbledore” in Harry Potter: Puzzles & Spells. In the in-game event, which runs through tomorrow, famed Magizoologist Newt Scamander appears in the game for the first time, as a guide and host. As a special event bonus, players can earn badges to collect the Niffler, the lovable magical creature known for collecting shiny objects and treasures. For the first time, players can keep the Niffler as a permanent creature they can use in gameplay going forward – but they need to act quickly to seize their chance.

Players who’ve been swept into the Fantastic Beast Celebration can dive even deeper into Harry Potter: Puzzles & Spells with the special Magical Creatures Season that runs from late April to late May. This in-game event enables players for the first time to unlock the Qilin, perhaps the wizarding world’s most revered magical beast, to help complete Puzzles when activated.

“We’re incredibly excited to announce the latest Harry Potter: Puzzles & Spells in-game event series in conjunction with the release of Fantastic Beasts: The Secrets of Dumbledore,” said Yaron Leyvand, Executive Vice President, Games at Zynga. “The film series has created a massive global fan following, and we are excited that our players can see the film’s most beloved characters on the mobile screen.”

In Harry Potter: Puzzles & Spells, players enter a Match-3 adventure brimming with the spells, humour, colour and characters of the Harry Potter series. Featuring the soundtrack and voiceover recordings from the original Harry Potter films, fans follow an authentic, mobile retelling of Harry’s journey through the wizarding world. Earning spells and special boosts as they advance, players solve Match-3 Puzzles populated with hopping Chocolate Frogs, fluttering Winged Keys, battling wizard chess pieces and other unexpected obstacles and objects. In the spirit of camaraderie and friendly competition at Hogwarts, players can join or form Clubs with other fans to socialise, collaborate on Puzzle strategies, share lives and vie for Prizes in exclusive Club Events.