AppsFlyer, the global attribution leader, today released its annual fraud report; The State of Mobile Ad Fraud 2020 Edition. As most mobile advertisers are increasingly aware of the dangers of app install fraud, AppFlyer’s new report reveals India as an emerging region for this evolving threat. The 2020 APAC report examines 3.8 billion installs across 55,000 apps in the Entertainment, Finance, Gaming, Shopping, Social, and Travel verticals.

AppFlyer’s research indicates that fraudsters are primarily relying on Bots across verticals to fake app installs. Tactics like install hijacking and click flooding are on the rise owing to fraudulent activities that steal attribution credit from real users (organic and non-organic). Additionally, Device Farms,and Attribution hijacking are central to fraudulent activity among Android devices, making  it the platform of choice for fraudsters. 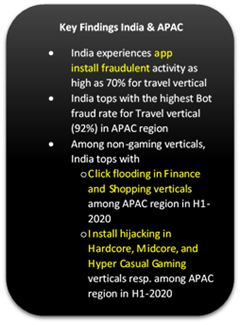 “COVID-19 has forced many countries to implement strict lockdowns, resulting in work-from-home arrangements that are now considered the new normal. With more people spending time at home, H1-2020 saw a marked increase in mobile app usage, particularly in the Gaming and Entertainment verticals, thus tempting fraudsters.

The report revealed how Bot attacks dominate fraudulent activity in APAC in H1-2020 and average fraud rate stood at 54% higher than the global rate.

Finance and Travel Apps are most prone to Fraud ; potential loss of money
The report highlighted that among Non-gaming apps across all regions, the Finance and Travel verticals suffer from the highest fraud rates.  APAC markets are responsible for the highest fraud rates in the Finance and Travel verticals due to high cost per install rates and large marketing budgets. Fraudsters are attracted by scale and high payouts, both of which characterize these verticals. Work from home and monitoring finances online, mainly via banking apps, marked as the key reason for rise in online frauds in Finance vertical.

Global financial exposure to app install fraud in H1 2020 was $1.6 billion, a 30% drop compared to H1 2019. Financial exposure is the money that would have been lost to fraud had there been no protection. 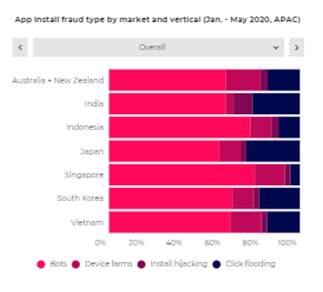 According to the report, Finance is the most exposed vertical, with 40% of overall exposure, amounting to a staggering $630 million in H1 2020. Shopping apps are faring better this year, with a 30% decrease in exposure compared to H1 2019, or a total of $260 million at risk.

Methodology
The State of Mobile Ad Fraud: 2020 APAC is an anonymous aggregate of proprietary global data from 3.8 billion installs across 55,000 apps in the Entertainment, Finance, Gaming, Shopping, Social and Travel verticals measured in April-June 2020 vs. July-September 2019.

The State of Mobile Ad Fraud: 2020 APAC is available at : https://www.appsflyer.com/resources/mobile-ad-fraud-report/