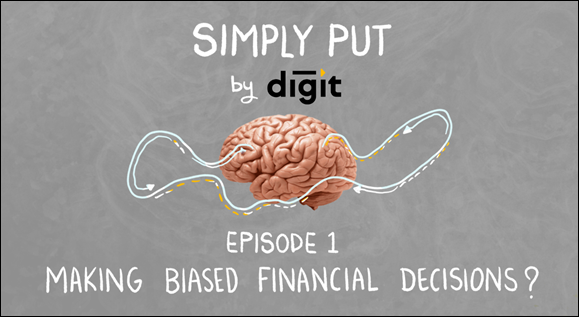 The first episode of the series titled “Is your brain tricking you into making biased insurance decisions?” focuses on three subconscious biases that influence important financial decisions. The episode acquaints viewers with three commonly encountered biases when making financial choices—Optimism Bias, Present Bias & Familiarity Bias—and tells how such cognitive biases often lead to wrong decision making. The video also goes on tell how one can identify and smash such biases.

Commenting on the newly-launched YouTube series, Tanya Marwah, Vice President and Head – Brand Marketing, Digit Insurance said, “The ‘Simply Put’ series is one of our latest conquests towards making insurance simple. Tackling inherent biases, doubting the real value of health cover or thinking of insurance through different life stages is something we have all done at some point in time. The series will demystify these complex ideas, albeit through simple and easy-to-understand references, all in a fun narrative that people would hopefully love watching.”

The upcoming episodes will delve into themes around health insurance. The series, aimed at millennials and zillennials, will explore how individuals should view a health cover across different life stages. The series will also explore topics surrounding the financial cost of having a health insurance, importance of mental wellbeing and wellness benefits, among others.